We had a lovely interview over email with Paul Beumer, one of the firsts residents at Qingyun on the southern outskirts of Beijing about the work he did using shibori textile dyeing techniques.

China Residencies: What first interested you in moving to Taiwan and finding residencies in China?

Paul Beumer: During my residency at the Rijksakademie in Amsterdam, the book 'Early text on Chinese Painting,’ written by Susan Bush and Hsio-Yen Shih, made a deep impression. Different texts in the book describe how important it is not to paint a copy of reality but to capture the spirit of what you want to depict. Very early on in ancient China, painting became more than just a physical activity. People would judge a painting on the painters ability to look further than just the surface. I'm aware that Chinese painting nowadays is increasingly Western-orientated, but I was wondering if these classical ideas about making a painting still exist in today's China. At first, this seemed not the case. But when I oriented myself more independently, I discovered a wealth of information and a certain preference of Chinese people for their own cultural heritage.

When I came back to The Netherlands after my first stay in China at CEAC in Xiamen, which is close to Taiwan, I almost immediately missed a certain way of life that seems to suit me. Overnight, I decided to move to Taipei.

CR: You emailed China Residencies for recommendations a few years back, and then came to Qingyun as one of their first residents - how did that come about?

PB: Annelie Musters, who I met in Xiamen and who was aware of my wish to stay in China for a longer period of time, introduced me to China Residencies and suggested me to send an email for recommendations. Although there were many residency options, I ended up making a more long-term decision and moved to Taiwan instead.

After a while, I received an email from Takeo, who works at Qingyun. He found my works online via, introduced me to Qingyun residency and asked me if I was willing to come over to Beijing.

CR: How long did you stay, and what did you work on?

PB: During the four-month residency in Qingyun, I investigated the technique of tie dye and 'shibori', the Japanese technique of resist dying. Pieces of cloth are folded in a specific way, tied up and than dyed in Chinese ink. The visual outcome is more systematic and components are more clearly defined than in my previous works. Resemblances with works of Agnes Martin or Frank Stella may arise, but more as a faded memory of those 'high art' pieces made in the abstract era. The use of cloth and ink is a way of focusing on intrinsic values and ignoring material hierarchy. Unlike paint on canvas, on these cloths, black can just be black and patterns can just be patterns. When marks are just marks they communicate only their existence and force viewers to be creative in their search for meaning.

CR: Your work involves natural dyes and textiles - how did this residency change the way you work or approach these materials?

PB: The freedom I felt during my stay in Qingyun had to do with the confidence the staff of the residency put in my working process. I think that is very important. It allow you to work inconsistently and more carefree, which is all you need in order to move the work to a next phase.

PB: Qingyun is located in Daxing, south of the 6th ring of Beijing. It take an hour by bus to get to the nearest subway stop to go into city centre. Daxing is a small village surrounded by countryside and farmland. At Qingyun residency they grow their own vegetables and fruits and keep some animals. The area is peaceful and because there are not many distractions, it is a good place to focus on making works.

CR: How did you find Beijing overall?

From Daxing, the city of Beijing is like smoke in the distance.

CR: How did you approach planning for your exhibition? How did you come to stage your show in the greenhouses?

PB: The choice to work on loose cloths has something to do with the desire to let go of the traditional canvas. It also helps me to move away from the idea of a conventional presentation. When preparing the show at Qingyun, it wasn't very clear whether the works would hang on walls, lay on the floor or even float through space.

This open-ended approach appeals to me, as every space calls for its own treatment, which you can only experience through being there. For the show, I was thinking about a presentation aligned with a return to a mode of existence that is spontaneous and more natural. The greenhouse seemed perfect and I was very happy the team of Qingyun was also enthusiastic and open to this idea of taking the paintings out of the white-cube. The paintings were displayed inside a bamboo structure in the middle of the greenhouse, along the plants and mud. 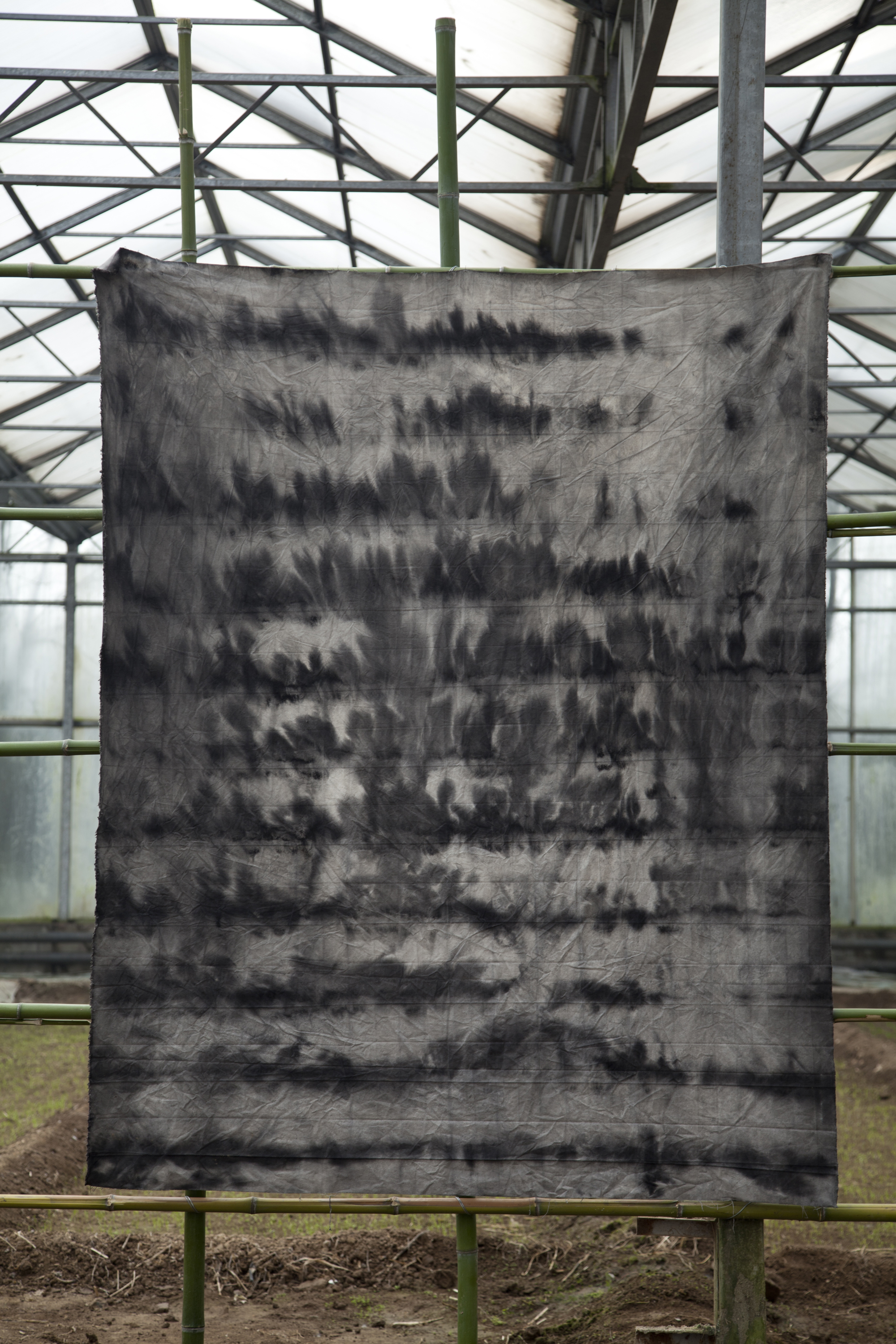 One of Paul's works on display in the greenhouse at Qingyun.

CR: Did you overlap with any other residents, and if so did any collaborations come of it?

PB: I was the only artist working in Qingyun at that time.

CR: Have you continue the series you started at Qingyun?

PB: After the residency, the pieces made in Beijing were on display in the group-show 'Black' at Museum Kranenburgh in Bergen, The Netherlands. They were also part of an international group-show about painting, 'Stretch release,’ at Gallery Dürst Britt & Mayhew in The Hague, The Netherlands.

In August this year, Dürst Britt & Mayhew will show some of the Qingyun pieces in a presentation at CODE Art Fair in Copenhagen.

My current work still involve fabrics but has moved away from the folding technique.

CR: Has the residency led to new opportunities?

PB: Each series of works begins with something new that is usually a discovery from the series I made before.

CR: Where are you currently based and what have you been working on since last summer?

PB: I'm based in Taipei, I've been working on my solo show, 'The message of the flower is the flower' that opens 16th of September at Dürst Britt & Mayhew gallery in The Hague, The Netherlands.

This interview was conducted over email in July 2017 by Josue Chavez & Kira Simon-Kennedy for China Residencies.