We visited Barbara Tong during her Swatch Art Peace Hotel residency to talk about ceramics, Shanghai's chorus of voices and residencies around the world.

China Residencies: Tell us a little about your background. Where did you grow up and how did you get interested in art?
Barbara Tong: I’m from Hong Kong and the local opinion back in those days was, “Oh, don’t be an artist, go make money!” But I really enjoy doing things with my hands even though I didn’t study art. And then while studying in London, I used to walk past an art school almost every day because it was close to my Uni, and they had students’ work displayed in the window. I looked at the artwork and thought, “Oh my god, this is so cool! I wish I could do something like this one day.”

CR: What were you in school for at the time?
BT: I was doing my first degree in actuarial science in London, which is kind of like financial risk management. I went back to Hong Kong to work after I graduated. Those were a few stressful years, I thought I needed a new hobby. And don’t ask me why, but I decided to do flower arrangement. I think I was very lucky because I found a very good teacher. He’s from Japan and his work is not just flower arrangement, but more like using botanical materials to make sculptural installations. After learning for a few years, I looked at my work and thought, “Hey, this is like an art form!” I prepared a portfolio and sent it to the art school that I used to walk past every day! They rejected me because I hadn't completed the foundational degree, so I enrolled in a foundation year but I was still very stubborn and dedicated to getting in. But all my tutors told me this school wasn't really my style.

CR: What school was it?
BT: Central Saint Martins. It’s so funny because someone told me to look at another school called Chelsea College of Arts. I applied to both of them and I got accepted to both. I went to Chelsea’s Open Day and fell in love with it right away. It’s so funny because I was always dreaming of going to Central Saint Martins and then I got accepted, but I went to the Open Day I just wanted to leave after three minutes. Something about the atmosphere...I’m very responsive to the environment. It’s kind of like my work. When I walked into Chelsea, I loved the place right away. But then when I went inside Central Saint Martins, even after passing it so many times, something about actually going inside didn’t feel right.

CR: Do you know what about it you didn’t like?
BT: No, it’s just the environment, the people and everything together didn’t feel right to me. But I love Chelsea so much and had the most amazing three years there. And I really, really appreciate that I got accepted and did my degree there. So I graduated in 2011 and I’ve been working as an artist since then. 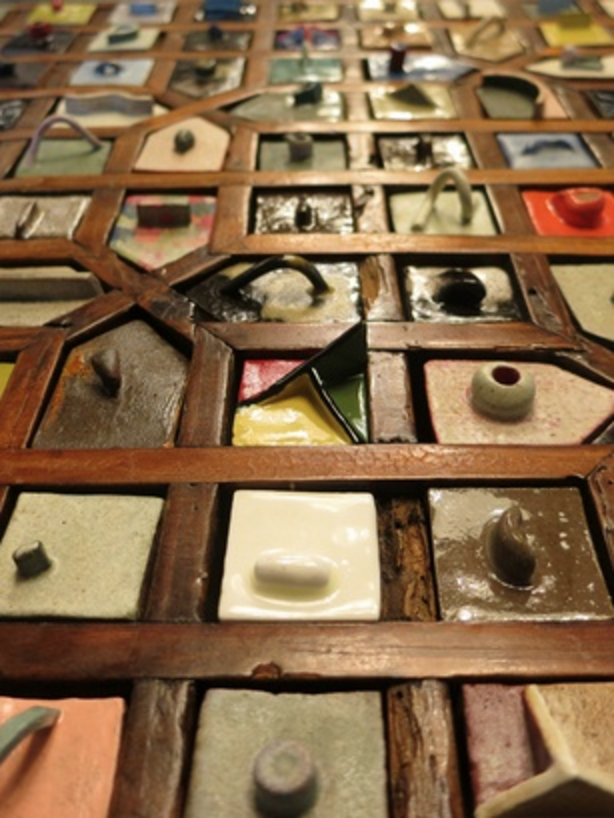 CR: What are you working on at Swatch? Can you tell me more about this ceramic and wood sculpture [where each ceramic house acts like a drawer that plays a sound when pulled out of the wooden frame]?
BT: The sculpture, currently called Shanghai Rhapsody, is kind of a reflection on the communist vibe in China. Information is really controlled here but dissenting voices are really important for society. I made field recordings of various places with high volumes of social interactions, divided the ceramic pieces into male and female voices, then mapped a musical note to them based on vocal singing range. So each will have a different musical note and there a sensor at the bottom. You can rearrange them so they play different tunes according to a preset rhythm and tempo. So it sounds like a lot of people singing, each with their own voice but creating a harmony together. But it’s also random so I don’t know what it’s going to be like.

CR: So you made each individual piece and then you fit them all together.
BT: They don’t have ceramic studios in Swatch, so I looked online and found this ceramic workshop. When I go there I have to pay extra because I am renting their studio. But it’s very reasonable and it’s very close by. So for the first month, I was thinking of ideas and by the second and a half month I would go there almost every day to work.

CR: Do you like being part of this big group?
BT: Yeah! It’s so strange because I was the only artist in the first residency I did in Finland, and then alone again in the second one in Japan. So this is the first time in a residency with other artists. I really enjoy it and we have so much fun together. I think I’m going to miss everyone here. I think that’s one of the best parts of the residency.

CR: What got you interested in doing residencies in the first place?
BT: I’ve been in London for quite some time. My work is very much about the environment and so I thought it will be interesting for me to see how I respond in a different place that I’ve never been to before, because it will be very fresh, and there will be new ideas. I use a lot of natural materials because of my flower arrangement background. It’s very natural and rural.

For my first residency, I decided to do a residency very close to nature because London and Hong Kong are nowhere close to nature. I got accepted to a residency in a small village of Finland, KulttuuriKauppila Art Centre, with an amazing forest on a three month residency. It was so pretty there in the autumn season, so many colors! Another great thing about Finland is the forests: anyone can go in and use its resources. I found all my materials in the forest, it was like heaven! 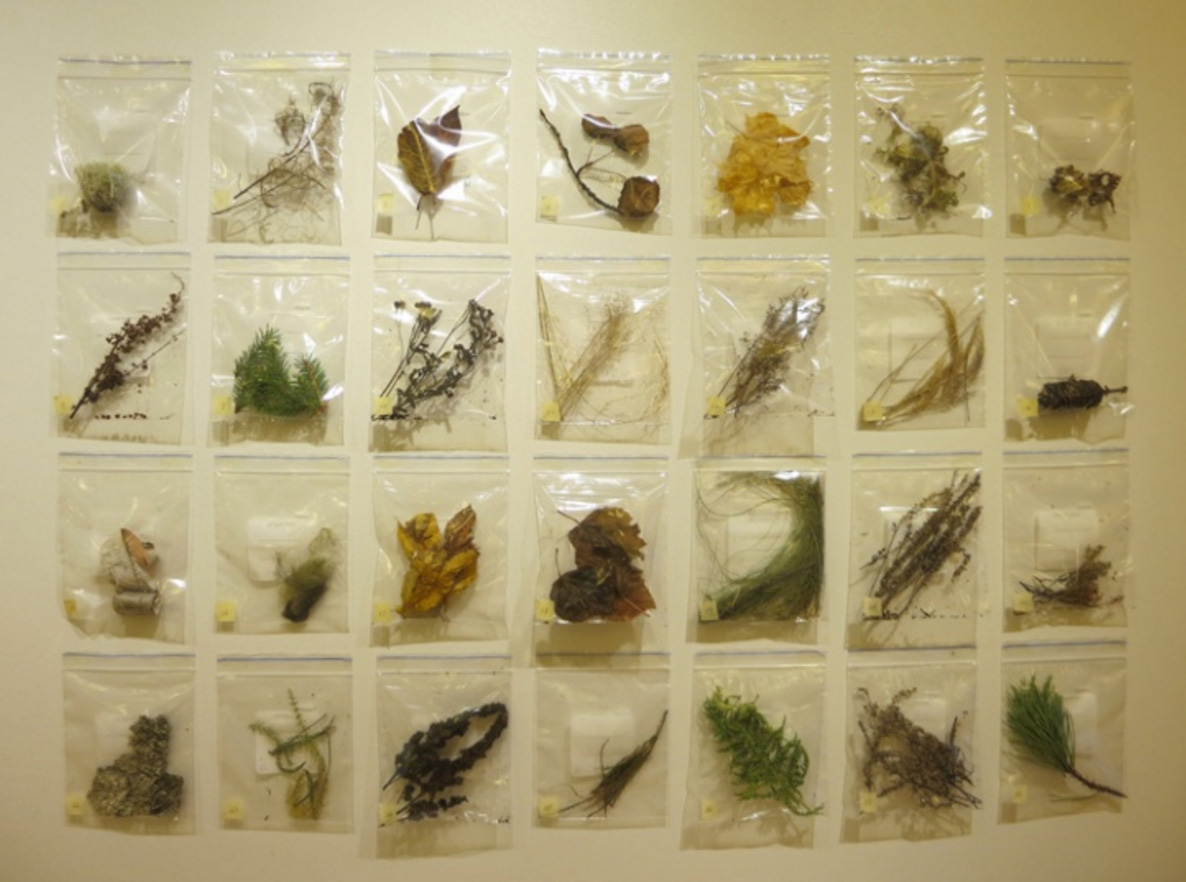 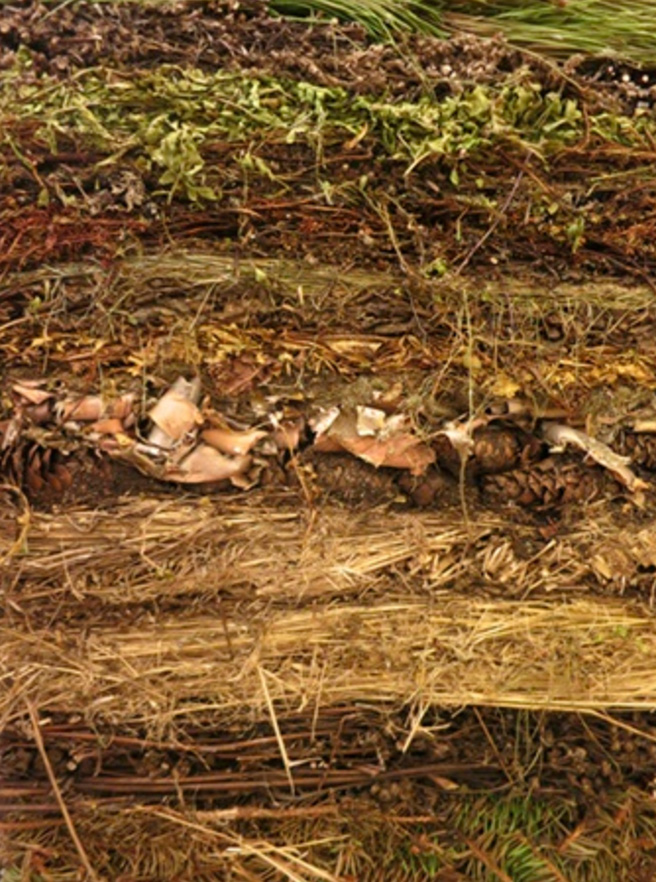 CR: And what did projects did you do there?
BT: There were a few I did responding to the space and all the objects. I was in the small town called Ii. Sometimes I’d just go hiking in the forest with people from the town, find a plant I thought was interesting, tell them, and find out I was welcome to use the water from the plant to make anything from tea to jams. So for this project I walked around in the forest and collected and recorded my collection of specific materials, whether for it was aesthetic reasons or because they just stood out to me. I preserved them, studied them, and then saved them in a box. Right now there’s 28 of them. I think the most challenging thing about this project is how to preserve the color. For example, the Aspen Leaf has a shape and color that I really like but when I leave it for two days it becomes crunchy, dirty and ugly. So I tried different ways to see how I can preserve the color; in the end, I microwaved it.

CR: Really? For how long?
BT: If it’s very wet from the snow, you have to pat the leaves dry before you microwave it. You layer tissue paper in between the leaves -- image a layered cake -- and microwave them until the layers dry. The residency offered me a job teaching a children’s art class and I’m teaching this technique there. I like the idea of showing the children this circle of life, and that they’re the future of it. 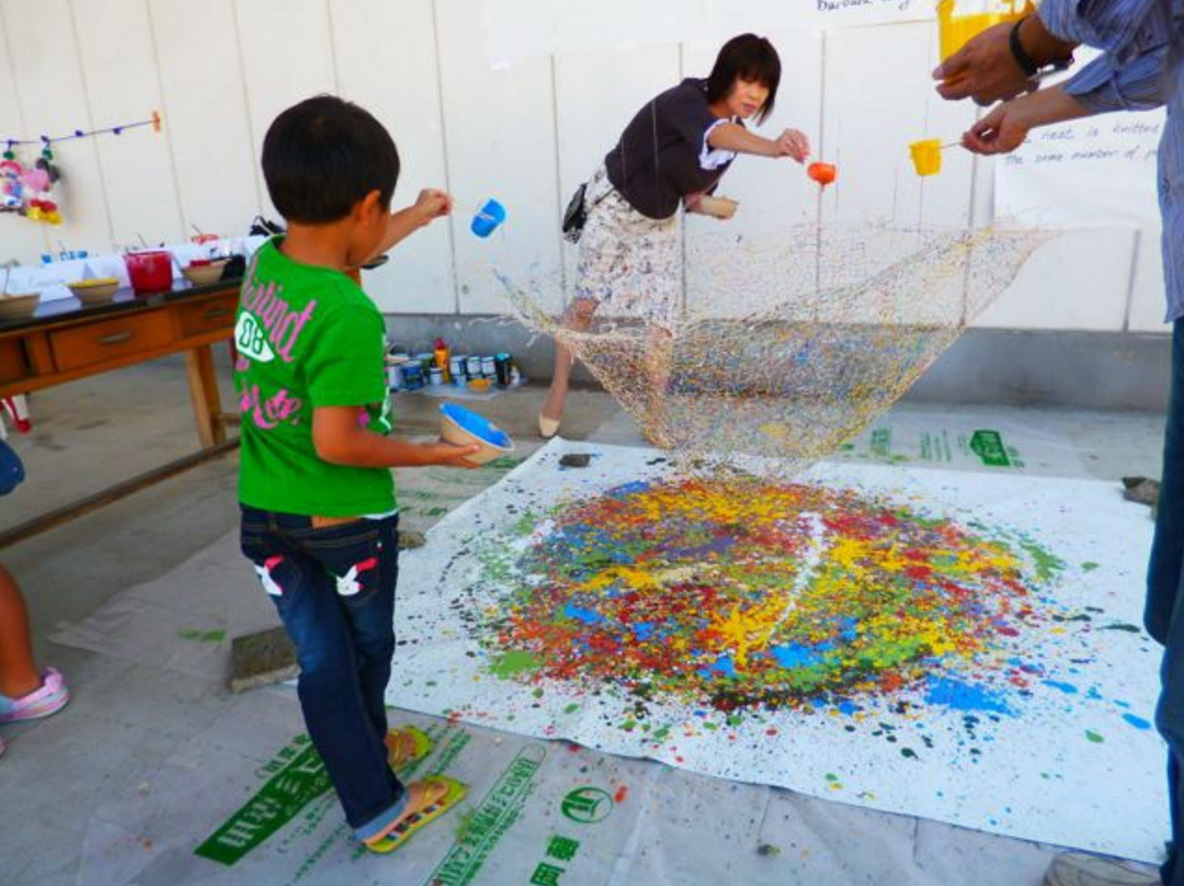 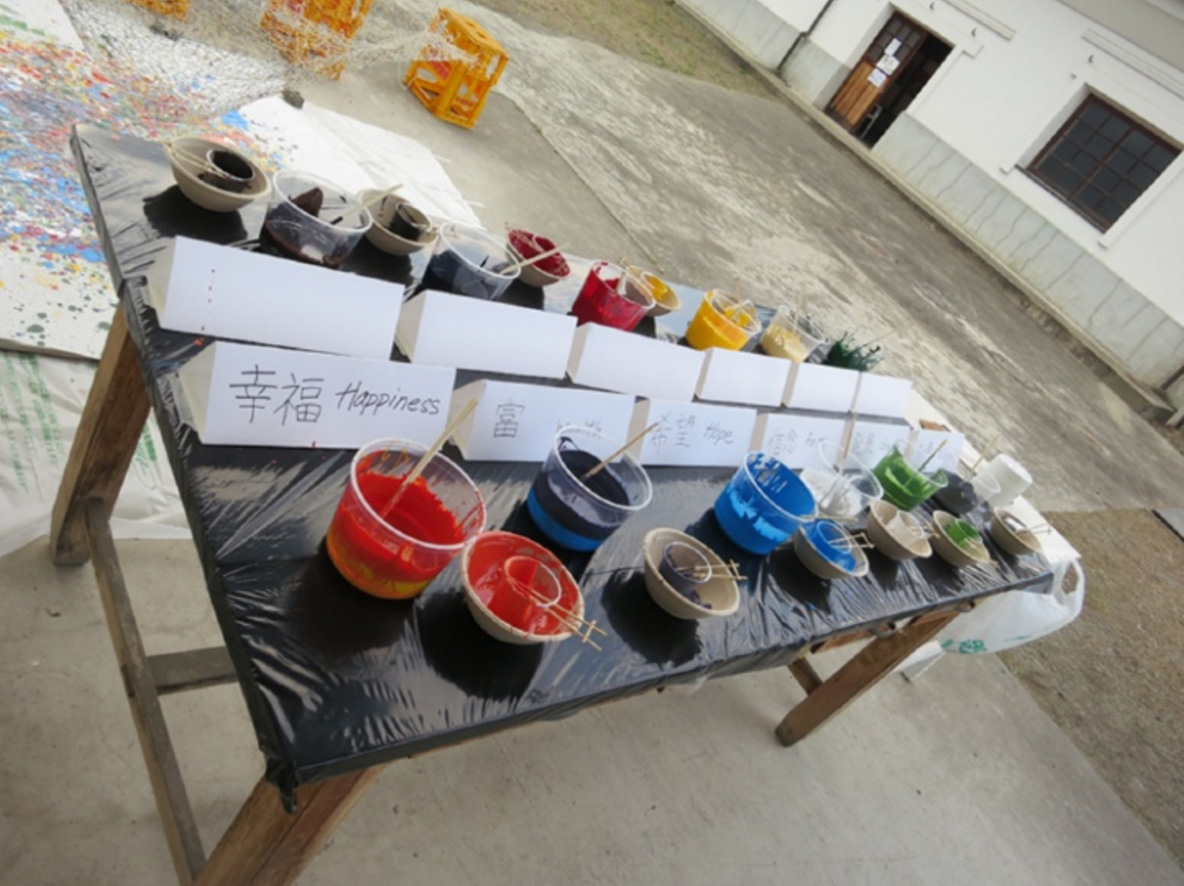 CR: You also did a residency at Shiro Oni Studio in Japan last year. Where was it?
BT: It was in a really small town called Onishi that has a population of 5,860 people. The piece, made up of 5,860 netted wire sections, is an interactive installation, and was displayed at an art festival. Based on my research of the meaning of colors in Japan, I chose twelve different ones: orange for happiness, purple for wealth, blue for hope and so forth. I asked the festival attendees to choose a color of paint that I had prepared, and pour it over the net as a gesture of blessing. The net is wire and coated with cotton so it picked up the paint well. At the end, all the 5,860 sections were covered with different colors, and it became kind of like an object of blessing returned back to the community. 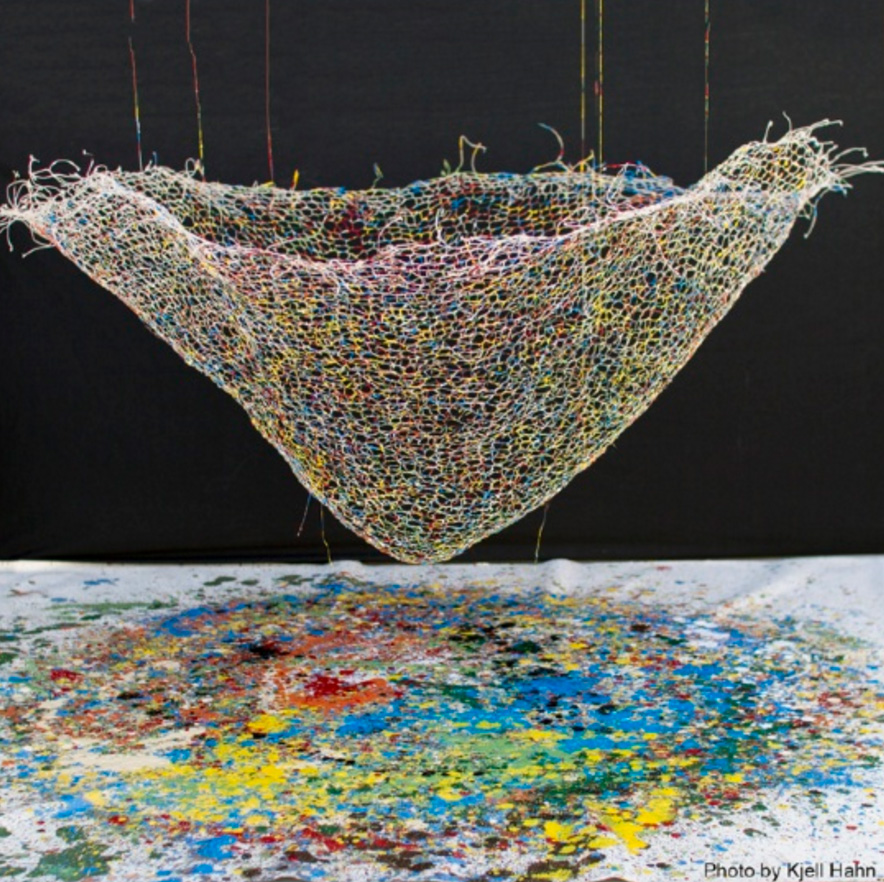 I want to show it in London but I’m going back to Onishi because I feel like the work isn’t quite complete yet. I made the work in Japan but when I move it to London it removes the context and relevancy. Onishi is just like any Japanese town, with the common issue of a dropping population, and groups of people in the community trying to make the town more attractive. This artist residency invites international artists to try and draw more people and attention to the town. Their goals are very admirable; feeling that genuineness is how I decided what direction to take my work in three days. In Shanghai, at Swatch, it took me almost two, three weeks to come up with an idea because there’s so many things happening at the same time and it’s so exciting and overwhelming. But there in Onishi, it’s so pure. It’s about the community. That’s why I want to show the project in London after doing some more work on it, like creating some video documentation of local residents, as a way to bring publicity to the town.

CR: That’s really great. Your bringing things back and forth between people who would never meet is like a transfer of knowledge from one culture to another.

CR: Is there anything you would change or improve about the program at Swatch, especially in comparison to the other residencies you've taken part in?
BT: I know it’s hard because there’s 18 of us but if they could give us more guidance about what exhibitions or events are happening in the city. They’re improving, but I remember when I first came, when I had no idea what I was going to do or how to do it, and I was looking for a ceramic workshop, they gave me information about a place that wasn't suitable at all, because, as an artist, I wasn’t really looking for a hobby class. Otherwise, I've really had a great time here and I really appreciate what they are offering me. And I think it’s hard to find another residency where everything is provided for you, and with such a nice culture. I think that it’s a good residency to apply to. And even if you are not so experienced, just apply! You never know.

This interview was conducted in Shanghai on September 3rd 2015 by Kira Simon-Kennedy, transcribed by Ariel Herman, and edited by Fei Liu for China Residencies.