In April, we sat down with musician and composer George Van Wetering in the Swatch Art Peace Hotel’s lounge area to ask him about his time in Shanghai:

China Residencies: What first got you interested in Swatch? How did you hear about it and how did you get here?

George Van Wetering: Through a friend of mine, Peter Vink. He applied first and got selected, he mentioned the residency to me and so I tried as well. I’ve been here since November, and he just arrived. I’ve been to China for quite a lot of times, about 5 tours of China, have seen a lot of cities but always for a very short time. I'm happy to be in Shanghai for a longer period of time.

CR: How long are you here for?
GVW: I was supposed to leave April 15th, but they offered me another month, so I’m staying until May 15th.

CR: Where are you from originally?
GVW: Amsterdam, Holland.

CR: On your previous times in China, were you touring music festivals?
GVW: Our first tour in China was in 2006. And every year since then, except in 2011 and 2012, we’ve been back for tours and shows. Yes, festivals as well: The Midi Festival in Beijing and the Modern Sky Strawberry festival in Beijing and Shanghai, the Shanghai world Expo and a few festivals in Guangzhou. Last year Modern Sky brought the festival to 12 other Chinese cities, so you can say China's touring market is expanding rapidly. 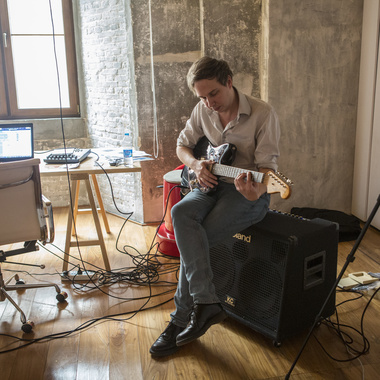 CR: What are you working on here? Is it a new album or a solo project?

GVW: A couple weeks ago, I got an offer to do 3 shows with an electronic artist called Achun. My drummer is not here, so I've been working on solo material and a solo performance. There will be a show at the Rockbund Art Museum next week. Right now I'm focussing on visuals, remixing old songs and the show at Rockbund features some music from a new composition I made as well.

CR: How’s it been working at Swatch and in Shanghai in general?
GVW: In the beginning I was very distracted by the city, the venues and the feeling I have to get to know new people. I made new friends and feel I'll see them again after the residency. I got used of the studio not being sound proof and i'm more focused on my work now, but it took a while. When it comes to music electronic musicians, DJs and VJs rule Shanghai's nightlife. Sometimes I miss seeing indie bands. The Swatch hotel offers so much space, my fellow artists in residence sometimes mention it feels like a mental hospital. For me it's very inspiring to be with professional artists with strong ideas about their art.

CR: Has it been hard to make music here?
GVW: Well, it’s not hard. Not many people complain. But everybody can hear what I am doing. And I can hear what everybody else is doing. They didn’t think about it that much, but i'm happy they do select musicians as well. I guess me making video now has something to do with the rooms not being soundproof.

CR: What do you think about how the people running the residency pick the people and how they design the program?
GVW: I don’t know how they pick the people. I'm proud they selected me, it’s an international committee (including George Clooney). I think they want different nationalities, people from all over the world. And people working in different art forms.

CR: Do you have a lot of contact with the people in Switzerland or is it totally hands-off?
GVW: Because of the visa problems and studio stuff I do. When it comes to art or the residency program, we don’t get a lot communication. Basically you're on your own after the selection. There are a lot of friendly people working in the hotel, but there are also 1 or 2 of which I wouldn't mind if they'd be working at the other Peace hotel across the road.

CR: Do they help you meet other people or find out what’s going on?
GVW: It’s really up to the artist. Some artists are having a hard time being in their studio or hotel room all the time. What Swatch is offering is quite a lot already. Its really unbelievable to work and live in a 5 star hotel. It's that what they offer and I'm very grateful.

CR: How’s the group getting along?
GVW: I think we are doing very well. I arrived in November, and the group was a little bit settled. Now everybody is gone and I’m the only one from the old group. I’m trying to find my way into the new group now while focusing more on my work.

Whenever an artist is leaving a black car arrives in front of the hotel to bring the artist back to the airport. I've been waving goodbye to so many artists, it's sad because you spend a lot of time together and you become really close.

CR: Are there any Chinese artists here?
GVW: Yeah, Zhu Ye: during Chinese New Year I was invited over to celebrate with her family. There’s also a Shanghainese dancer, she just arrived.

CR: Do you wish the same 18 people would be there the same six months?
GVW: It would be easier for everybody. You have to get to know people and when you do, you go through a lot of things together, I've experienced that several months ago, so now it's like doing it all over again. In general both groups get along quite well. I feel very sorry for artists who are left out.

CR: Do you feel like it was easy to meet people in the music scene? Were there people you already knew or did you just show up and talked to them?
GVW: I knew a few people through the former keyboard player in the band, she's from China. I also know people at Splitworks Shanghai. Yes it's easy. The city is huge but the scene is small. You share cards and use WeChat all the time. In the beginning I didn't know a lot of people, I was forced to go out myself, explore and find the venues that I like. 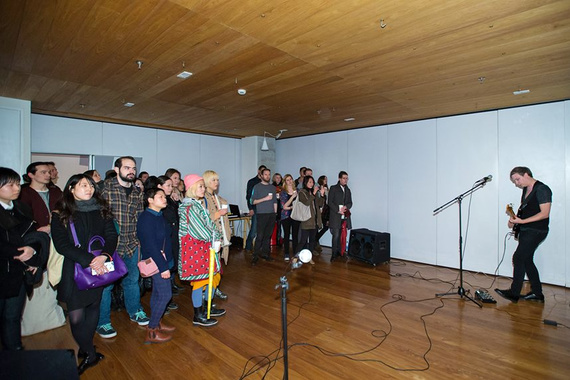 CR: Did you have a WeChat account before coming?
GVW: Yeah, but I never used it. Now I’m using it all the time.

CR: Have you been able to work on all the projects you want to work on?
GVW: Yeah, sort of. I wrote a lot of new songs and finalized my visuals. I‘ve never done a residency before, I miss my family and girlfriend so that distracts sometimes, but I'm quite focused now.

CR: Did you bring over equipment with you or did you find some here?
GVW: I brought my computer, keyboard and guitar. I’m recording everything on my laptop. For live shows I need to rent amps or equipment. Swatch helped me with renting a backline for the open studio show.

CR: It’s an interesting concept to come here and have to deal with all the constraints and everything, but also make the work you want to make.
GVW: It’s like a little village. Whenever you go to the kitchen, you have a talk with someone. In the beginning it was cool, but now I feel like I should focus on my work only. I only have 6 weeks left.

Postscrtipt:
CR: Looking back, what were some of most memorable experiences you’ll remember from the residency?

GVW: I remember the incredible feeling of returning to the hotel after being out and thinking: how come I live and work in a hotel on the Bund, what's wrong with me and why me? I'm still in contact with people from the old and new group, my most memorable experiences have been the dinners (I'm a really good cook) and the group-vibe in general. Some artists became really good friends, so the people and artists did it for me. I wrote new material, did 6 solo performances and shot lots of video. I am invited to work with an artist known for his performance in the Voice of China, I'll be in Nanjing this summer. I'm planning to visit the Swatch Art Peace Hotel again. It's been a very pleasant experience. 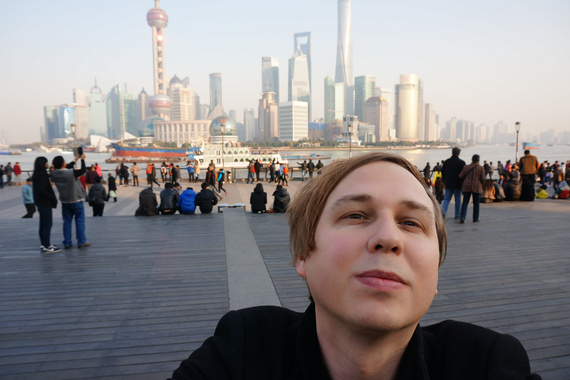