China Residencies:  How many residents do you host and what is recommended length of stay?
Liu Lifen: Lately, we've had assistants run this program full time so we can accept 5 to 6 artists each year who stay at minimum for one month and up to six months on residency. We don't really take artists for less than a month, we prefer at least two or three months. One month is just too fast. But overall, the artist's application is much more important than the timing.

CR: What kind of facilities do you have on site for the artists?
LL: We have two apartments and three studios. The studios are 16 sqm each, they are quite small. It's difficult to find studio space in Kunming.

CR: What is the art scene in Kunming like?
LL: TCG Nordica was the first art community in Kunming. It's one of the first in China actually, it's even older than 798 [art district in Beijing.] We moved here three years ago because we wanted to start this program and we needed studios and our own space. The developer in charge of this area came to me because he wanted to start an art community -- this is happening all over China, cities are starting to want to develop their creative industries. I was active as a curator and I had this program, they thought it was an attractive addition to the area, so we moved. I'm the only artist in the area, the other tenants are more commercial beacuse I don't think anyone can afford it... even for us, it's really expensive.

Foreign media often reports on how rich China is becoming, but Yunnan hasn't really a part of that. This region is far away from the capital, far away from the economic centers. We do have NGOs here that support agricultural development and medical issues like HIV treatment and agriculture, but there are very few, if any, initiatives relating to culture. I hope this changes eventually. It's the same when people come and think that you're well off if you run a gallery. So many businessmen came, wanting to invest money, because the word 'gallery' sounds fancy… everything looks nice so people wonder where we got the money, but really we did everything ourselves, we painted the floors, we even did the metalwork by hand.

CR: How did Tai Space get started?
LL: I used to work for Nordica as a gallery director, then in 2007 I moved everything here and we really started our own thing. I started the program with two friends, a graphic designer and a fashion designer. We set up a studio here and last year we opened up the gallery. It was an artist run space for a year, but that wasn't working -- it was difficult, in part because resident artists would want exhibitions but couldn't plan for them in advance. So we decided to set up a real gallery with a scheduled program where we could do better exhibitions and promotions, which residents can book in advance. Now residents have to apply for a gallery show separately from the residency application, to help both the artist and us to prepare and plan.

CR: How is that working out?
LL: Well we're still not really making any money. We might need to try something else, we're thinking of creating a design store to sell high quality handicrafts, independent publications and a maybe cafe together in this space. That way, when people come to see an exhibition, they can enjoy this space as a café and read alongside the cultural space. We also want to turn one side of the space into a creative flower shop, because I really like flowers. The gallery will show more experimental and serious artwork from young artists we want to promote. This space here will be more for small sized art that people can take home.

LL: We only want to see ten pictures in the applications and read a one line proposal. Very often for me, just from email conversations, we can really start to understand what kind of person is coming. We're looking for independent artists - we're not babysitters, we can't help with that. All of us here also very independent, we all work on our own projects alongside the resident artist.

CR: Tell us a bit about some of the work created here.

LL: The painting behind me is by a Swedish artist from Malmo, he has been coming to China every year for 12 years now. He's been living by his art since he was 19 years old and has had over 160 solo exhibitions all over the world. He travels here every year for a couple months to create work, for him, China is his second home. 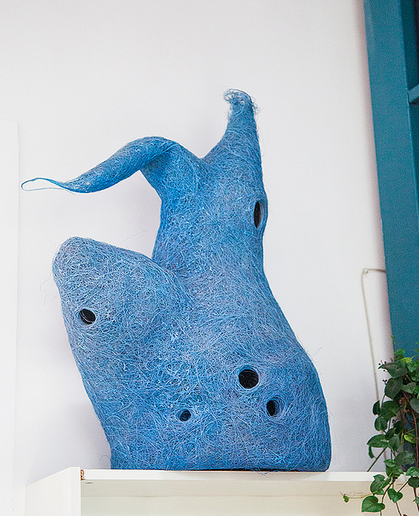 This interview was conducted in 2013 in Kunming by Crystal Ruth Bell & Kira Simon-Kennedy for China Residencies.