We've caught up with Alicia King who participated in our Two to Three Residency at Organhaus on 2015. King is an interdisciplinary artist exploring perceptions of technology and biology; her practice has examined tools of biological technologies, as a way to explore contemporary perspectives of the human body as a conceptually loaded, transformative, raw material. Read on to learn more about her time working with neon-balsa signs and her reflections about our technological future after experiencing Chongqing.

China Residencies: You first applied to Two to Three in 2014. How did you hear about the open call?

Alicia King: I found it through looking at a residency at Red Gate in China.

CR: Can you describe what your final project at Organhaus was?

AK: During my residency, I developed new neon-balsa (balsa refers to a kind of light-weight wood) text works, incorporating English and Mandarin characters, that were placed throughout the neighborhood as temporary 'signs' on local shopfronts and building facades. Simultaneously utopian and dystopian, these works explore the complexity of technological promise and reality. This mythology of the ‘future’ seems quite relevant in this space of intense growth and development, amidst a vast disparity of resources. 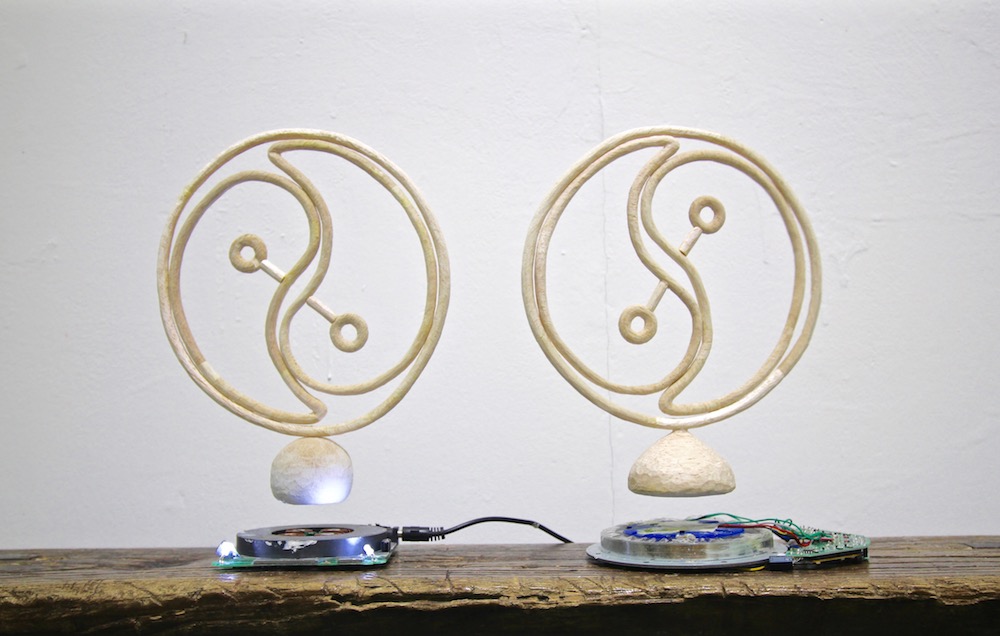 CR: You mentioned in your project proposal that you were interested by the contrast between China’s natural landscapes and the prominence of its top-tier cities like Beijing, Shanghai and even Hong Kong. How did the landscape end up influencing your process?

AK: I experienced the natural landscape as quite visually extreme – almost like magical realism. I think being close to that kind of biological intensity reminds us that cities are just developments upon natural areas – something easy to forget when you’re enveloped by the concrete jungle of a Western city. Even the way that the enormous Yangtze river appears to weave itself through the Chongqing sprawl is quite striking. I think it embodies the kind of extremes that exist in Chongqing.

CR: Did you feel like there was a blur between industrial and organic there? Did that influence the work you made?

AK: Definitely, the freshness and rawness of local food markets mixed in with industry and waste. Walking through neighborhoods and seeing metal collectors piling up copper wire, the innards of the surrounding life, was reminiscent of seeing a whole organism at work from the inside. Very different from most Western cities where things are so framed, sanitize and fragmented.

In my neighborhood, one evening I saw a road being re-tarred, and the material used to make this new road was literally a mix of rubbish and bitumen - like an urban fossil in the making. In a way that epitomized the reality of organic and industrial futures.

CR: What first got you interested in making “neon” signs and levitating statues?

AK: I find neon really interesting as a cultural signifier of hi-tech. At the same time neon is like an atmospheric microcosm – gasses found in the atmosphere condensed in glass tubing and activated by electricity. So for me it really embodies the relationship between nature and tech. Creating ‘neon’ text in a natural material like balsa wood adds another layer of ambiguity to the relation between the natural and technological. 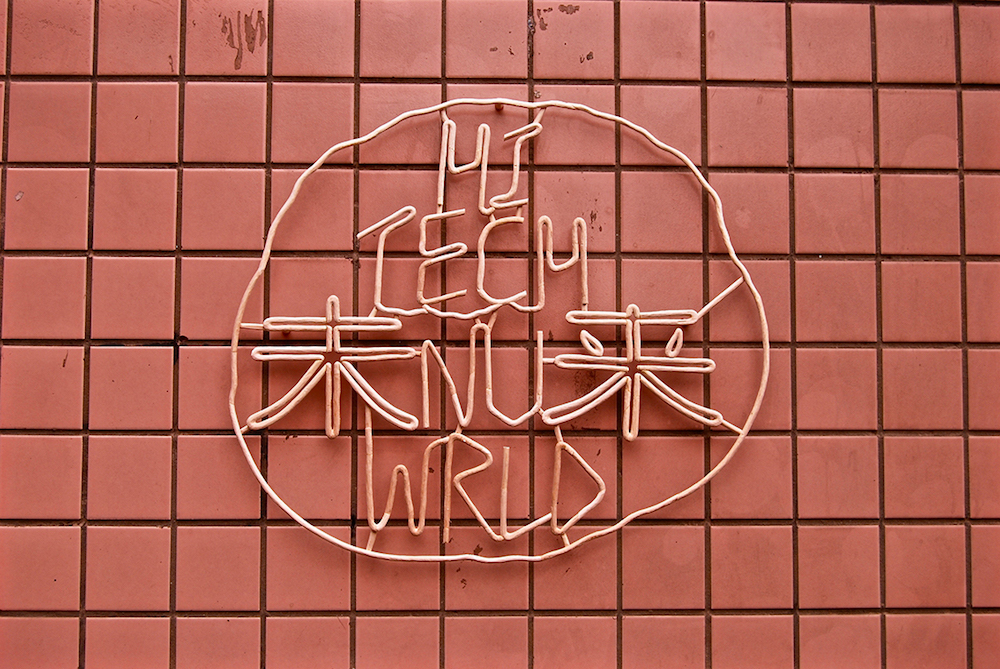 CR: You meditated a lot on the future during your time in Chongqing. One of your signs says “Hi Tech Nu World” --  did you feel like Chongqing fit your ideas or conceptions of a high-tech new future?

AK: I think ‘future’ and ‘futuristic’ have overly utopian associations. Even though dystopian narratives are strongly connected through history and pop culture, the first association with ideas of the future is inherently positive. Being in Chongqing was interesting because it’s much less resolved and the timeline of development is much more visible. Also I use that terminology quite ironically -  the future as its culturally defined is something that will never eventuate – the future is always the future, and in that sense it’s something that isn’t critically evaluated, because it never arrives.

CR: How were the statues and signs presented to the public?

AK: They were placed throughout the neighborhood as temporary 'signs' on local shopfronts and building facades (see banner picture). I also walked through the neighborhood with them, and was approached by many locals who seemed keen to engage. We had some nice moments of awkward communication and they seemed to enjoy the unusual engagement with the neighborhood. 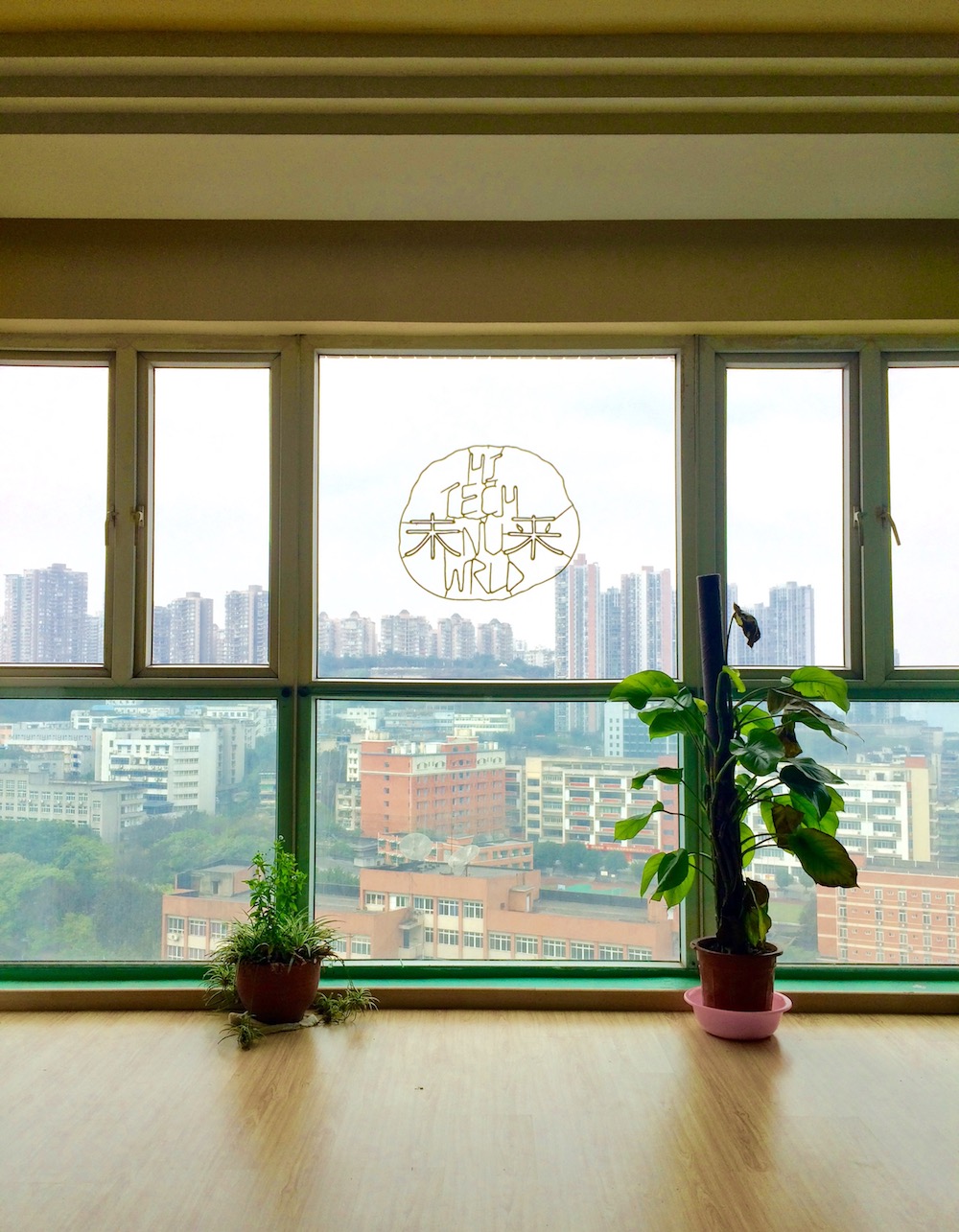 CR: What was it like, living and working in Chongqing?

AK: I really enjoyed it, especially in the evenings when it was the most vibrant. Locals inhabit public space with a lot more agency, there is less public/private separation and the workings of the place are a lot more visible.

CR: How did arriving and experiencing Chongqing change your view of what a high-tech future is?

AK: I think when we imagine hi-tech spaces we think of encountering them in the present, in an all-encompassing sense. Spaces like Chongqing show the whole timeline of development so transparently. In most western cities those spaces are really separate - segregated or hidden from view until they’re complete - but in Chongqing layers of development are really tangible, like a segment of earth fossil in development.

CR: How did your project change once you had arrived and experienced Chongqing?

AK: Chongqing was a lot more raw than I had expected, and a lot more dystopian. It’s called the ‘wild west’ of China for a reason. It really embodied a clash of utopian and dystopian realities co-existing alongside one another. Like in many developing countries, there are endless sprawling areas in poverty juxtaposed with high-end shopping malls that seem to appear out of nowhere. I think the scale of Chongqing makes this more shocking – you see the incredible numbers of humans that are affected, and the situations are systematically maintained by the State. From here, the future looks very dystopian. I became interested in using language that referred to typically utopian ideas – ‘hi-tech’, ‘nu wrld’ ‘ future foreva’ etc - with Mandarin text to juxtapose those ideas. 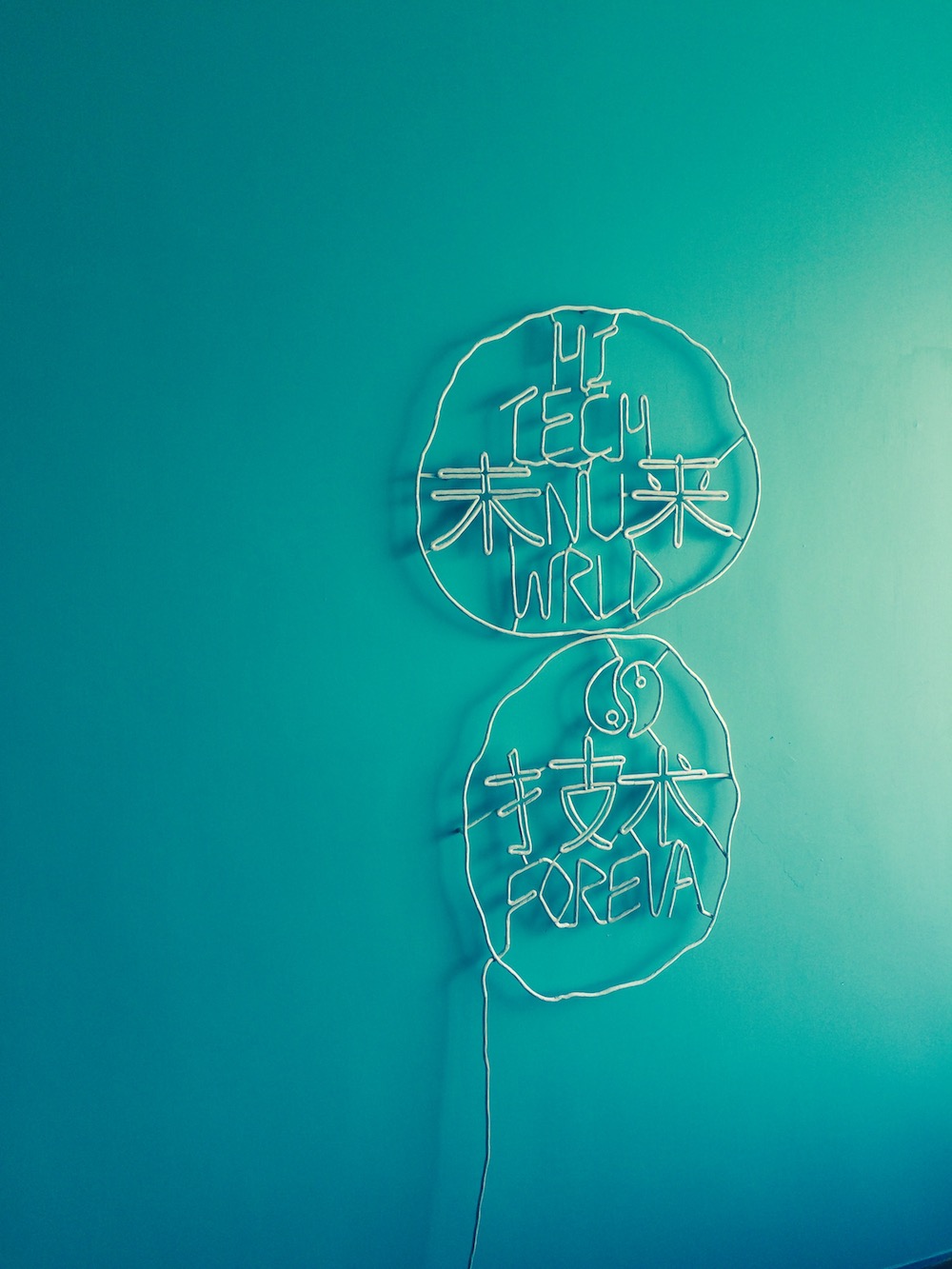 AK: I lived in Juilongpo, a University suburb that seemed to be a mix of apartment living and simple, more humble housing though all within a quite raw, gritty industrial context. I spent a lot of time exploring on foot around the derelict spaces and crumbling buildings in the neighborhood. Gentrification seemed a lot more obvious and jarring, so you really get a sense of development in real-time.

CR: What about Chongqing made it a good place for you to explore the idea of tech utopias?

AK: Chongqing is the largest city in the world, in one of the most populous countries in the world – making it an irresistible location to explore ideas of futuristic cities.

AK: I’d travelled through briefly from Vietnam to Hong Kong and saw some incredible landscapes of skyscraper-like mountainous forms that seem to sprout vertically from the earth. It was quite shocking, and really connected to ideas of evolution and developing landscape.

CR: Did you speak any Mandarin before coming? Did you learn some while there?

AK: I learnt some basic Mandarin, though it wasn’t very useful as Chongqing has it’s own dialect which is quite different. I picked up some basic language skills, though body language often became the main communicator.

CR: What opportunities did you have to share your work with the public? Any exhibitions, concerts or workshops?

AK: There wasn’t time to schedule an exhibition, so I gave an artist talk and presented work at Organhaus towards the end on my Residency.

CR: Where there other artists around you? Did collaborations, formal or informal, occur with other people at Organhaus or other local, cultural spaces ?

AK: There were two other Australian artists around – Jason Phu and Tully Arnot, as well as three British artists. We became a bit of a posse and ate together, went to exhibitions and on random adventures, though no collaborations that I know of.

CR: What has the afterlife of the project been like? Was it more of a one-time project for Chongqing or has it i been shown elsewhere?

AK: My experience in Chongqing was quite insular in a way, so I wasn’t sure at the time whether it would continue on in Melbourne, and looking back I see it as a very site specific project. I haven’t shown the work I made there again, though it has definitely fed into my thinking and developing of new work.

CR: During your residency at Urban Glass in NYC, you started making actual neon. How was that process of working in NYC different than working with wood in Chongqing?

AK: NYC and Chonqing are such different worlds, it’s hard to look at them comparatively.

My time in NYC was directed by my neon study, so it was a factory production-line kind of experience. Neon is super technical and quite difficult: The process of making neon is really traditional – essentially it’s glass blowing forms that you then connect to gas and electricity, so in a sense it’s a really traditional medium, and really trade-based. There aren’t a lot of female neon benders either.  Chongqing was more explorative but also inward focused… it was winter, so I alternated between exploring the city and carving balsa while being tucked away in my studio.

CR: What are you working on next?

AK:  I’m working on a large scale installation piece for a solo show in Melbourne late next year. The work explores ideas of post-biological landscapes,  and incorporates neon and levitation with object-based forms, so it’s a continuation of the same ideas I was looking at in Chongqing.

CR: Are you interested in going back and spending more time in China?