Kevin Ledo talks about his experience with the recently opened Jardin Orange residency in Shenzhen, which focuses on graffiti artists. Ledo discusses the terms of the residency, what it provided as well as its relationship to the larger urban area it's located in, which is part of a recent real estate development initiative.

Kevin Ledo: Ceet, the residency director, is into graffiti, so when Jardin Orange started their residency, they invited crews from all over to paint the buildings. They're interested in street artists who also have a studio practice, so they invited me. I got an email one day, I didn't think it was legit because I didn't see any pictures for a long time. I thought "Maybe this will happen, maybe this won't happen." But when I arrived I was like “Damn, this place is nice!" They set me up in a little apartment across the street from the studio, with a mezzanine bed.

CR: Do you know how they found you?

KL: I talked to Rebecca from the residency and she said they have a list of artists they found on social media

CR: Where are you usually based? And did you start painting in the studio or the streets first?

KL: I’m based in Montreal. I used to only do studio work and now I'm probably in the studio only half the time, so it's great to have time to focus here. I had a gallery show a few years back where I sold zero paintings, which is when I got into painting murals

CR: Is this your first time in China?

KL: I taught English in Taiwan in 2002, but this is my first time in mainland China.

CR: Have you gotten a chance to explore?

KL: I got here two weeks ago and I've been working a lot. I took one day off, but I've been drilling myself really hard. I'm trying to do three paintings in a week, which is totally unrealistic but I’ve been doing ten, maybe twelve hours per day. I'm taking the weekend off though!

CR: Well there are a bunch of openings this weekend in Shenzhen if you feel like leaving the neighborhood. So did you hop off the plane and get right into the studio?

KL: Yeah I hit the ground running. Luckily I have more time here, but usually with murals you land, they show you the wall, you eat, and the next day you start. That really messes with me; I have a hard time adjusting, especially with the time difference. But it's all right.

CR: How do you like it here so far?

KL: I love it, I like being in China, people are really nice. At first I thought they were really indifferent - not rude or anything, just indifferent. But as time goes on, the more we interact, the more I realized how nice everyone is.

CR: What's your impression of Shenzhen?

KL: Wow, what a massive city!I've never seen a city like this before. I've been to Sao Paolo, which also has really high buildings that go on forever, but everything here is brand new.It's really exciting. Yesterday, I saw these Tron-esque buildings. It was nighttime and they were all lit up. I thought - is this real?

KL: It used to be factories but they're converting them into apartments and studios.

CR: Are you having a show here?

KL: I think so? There will be a group show once they have a few artists, and then we're supposed to leave a third of the work. The residency is just getting started so I’m unsure.

CR: Ceet told me a little bit of the backstory…

KL: Yeah it's wild that this all came together, from that place [Jardin Rouge] in Morocco. I think the developer of this whole place wants to support culture and was just like "Yeah, let’s do it!" It's like the classic Western way of gentrifying now - get a bunch of artists to paint murals!

CR: At least it's transparent? I hope there's a plan to keep the artists here and not just to kick them out once they can raise the rent.

KL: Even if it [gentrification] is out in the open, it's immoral! But yeah, everyone understands what's happening. At least here, the factories have been closed for years and no one was living here for a while anyway.

This place is really interesting - the apartments and studios are really small and don't have their own kitchens, so instead there are some communal kitchens, a communal library and a gym.

KL: Yeah exactly. There are some young families living in these small spaces. It's interesting that people are sort of forced to be social.

CR: Shenzhen overall is a pretty new experiment in urban development, and so many people move here from all over the country to find work. These apartments are around 2,000RMB a month.

KL: That's really cheap. The upper middle class definitely has money - but you can see the conditions the construction workers are working under. The differences are astounding. I passed a store with $200 sneakers, and that's a lot of money forme but that must be what most of the workers make in a month.

CR: I was walking through the construction site next door, workers are using makeshift cardboard welding masks and knocking down walls with hammers.

CR: Have you done other residencies before?

KL: I did one in Tulum, Mexico but they didn't have a studio. The same people also opened a gallery in town so we asked if we could paint in there. We made it work; it was only for three weeks.

CR: How does Jardin Orange compare?

KL: They flew me out, they bought all my materials, and they gave me a stipend. I'm not even spending it all because food is so affordable. It's a really good residency.

CR: And do you have to leave work?

KL: Yes, we leave one third of the work for them to try to sell, and if it sells we get 40%. So it is a trade-off. They need to make some money, and for me it's great to be here, focus on work, and get a better understanding of what China's like.

CR: Did you come with a project in mind? And what are you working on while you're here?

KL: Not really, they suggested I work on a series. I'm trying to give myself stricter parameters: I usually work really colorfully so this time I'm sticking to red and gold, which I've worked with a lot in the past. I’m also focusing on geometric shapes and portraiture. I wanted to photograph people here before I started painting, but I ended up using photos I already took as reference for these three paintings. 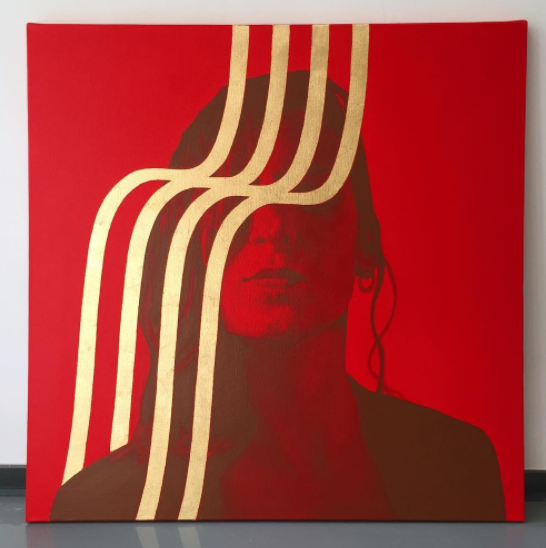 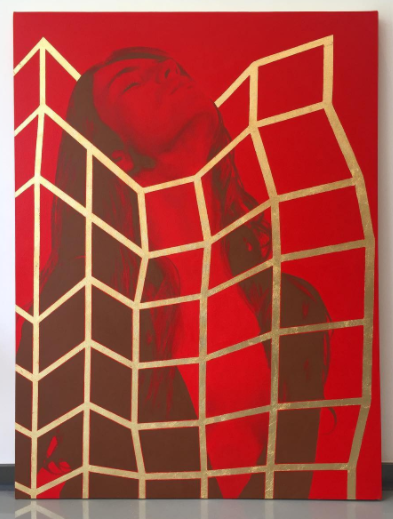 CR: Who are these people on the murals?

KL: This is a woman I photographed in Jordan. The one here is a friend's cousin in Montreal, and the one there is in NYC.

We did a photoshoot here with some contemporary dancers so the next few paintings and murals will be from that series.

CR: How did you meet the dancers?

KL: Rebecca, who organizes and manages the residency, mentioned that contemporary dancers were doing a video shoot on the roof, and I was looking for people to photograph, so it worked out really well. These two Chinese women and thisDutch guy have a dance company here, they are really amazing. I put in some minimal ambient music and they just improvised, it was great and I got awesome shots.

KL: It's really interesting - there are vinyl printouts of graffiti in malls. This is the kind of stuff that gets buffed as soon as it goes up back home, but here they print it out for decoration.

Besides that, I don't really know what it's like; I've only seen this area. I did drive by one area with real graffiti on both sides of the road, I’m sure there is much more to check out!