Stefan Hoffmann, originally from Germany, now living and working in Rotterdam, shares his experiences as an artist-in-residence at am art space in Shanghai in 2013 and at the Western Academy of Beijing & Red Gate Residency in 2016. His projects often involve teaching students and other artists. He uses vertical screen printing to create site-specific projects, based on existing graphic material. 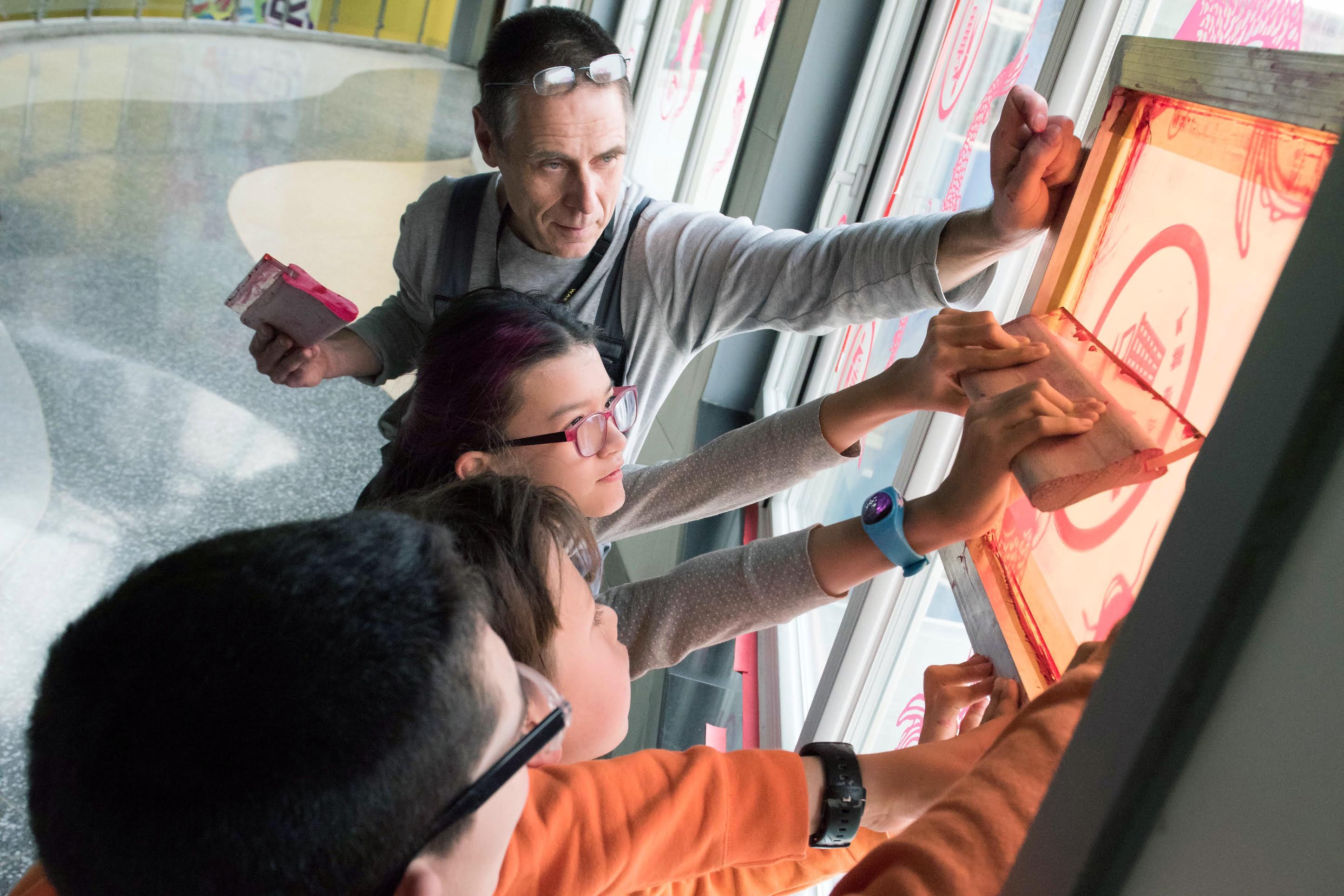 In 2013 I was in Shanghai for a residency at AM Art Space. It was my first time in China and a thrilling experience. I had never experienced a public more willing to understand and to learn. I was very much taken by that and eager to come back, eager to meet again with students, artists, and a more general public. Eager as well to learn more about China and the Chinese contemporary art scene.

The combined WAB/Red Gate Residency in Beijing was exactly what I was looking for: a strong educational commitment, but still enough time at hand to explore the Chinese capital and undisputed heart of the contemporary art scene.

The set up was perfect. The Red Gate residency studios are at walking distance from the Western Academy School buildings. Very convenient not to spend long hours in packed metro trains or congested streets during rush hour traffic.  A true luxury!  And the studios are beautiful, spacious with a well equipped kitchen. Everything is really taken care of, you feel the years of experience behind the red Gate Gallery residency program.  Airport pick up, meeting with staff, welcome dinner, open studio, artist talks. Something that worked particularly well for me was the fact that many of the artists staying in the residency studio's where there for a couple of months. So there is always an overlap. A healthy mix of newcomers and the ones that already know their way. My neighbor, John Domont, a painter, photographer and poet from the US, was already well acquainted to Beijing and became my guide. We made numerous visits to the infamous art villages and met with friends, but the highlight for me definitely was the big tea market. An entire neighborhood full of tea warehouses. John was a connoisseur of fine Chinese tea and we spent hours tasting endless varieties of green teas and white teas.

The Red Gate Residency studios are located in Feijiacun Village in the North of the city, fairly close to the airport. There are some signs of gentrification, the typical coffee place already opened its doors, but in general it wasn't fancy at all. For a lot of migrant workers from rural areas, Feijiacun is the first stop over. The contrast with the compound of the Western Academy of Beijing couldn't be bigger. WAB doesn't seem to lack resources and the student population also seems to come from a pretty affluent background. The array of top notch luxury cars with drivers picking up kids at the end of the day was impressive. For me, living in Holland with a large middle class population and where the material riches (and the lack of them) is rather discretely hidden, such a clearly visible gap between the rich and the poor is mind blowing. To imagine that this transformation started not much longer than a one generation back is something I still struggle to get my head around.

The Visual Art program at WAB's elementary school is ambitious and it was a pleasure to be a part of it. I myself also had a pretty ambitious plan regarding how to work with the more than one hundred 5th grade students. I wanted to introduce them to screen printing, make all the technical equipment available and accessible not just for me, but also for future projects, make large series of prints on paper and work collaboratively on a site specific vertically screen printed installation on the windows of WAB's Atrium. That was a lot, maybe a bit too much even! I had done quite some educational work before, but most of the time there was a support crew and more time for the actual project.  So I had to work hard to get it all done, very hard towards the end. On the other hand, everyone works hard in China and it was very gratifying to engage with the students, especially on the installation on the Atrium windows. The prints on paper were done during the regular art classes, the printing on the windows was voluntary. Students were free to join during their lunch breaks every day. And they did in significant numbers. I had a bunch of regulars who would come daily and it was impressive to see them developing their vertical screen printing skills, making their own artistic choices and looking out for the new ones that came for the first time. 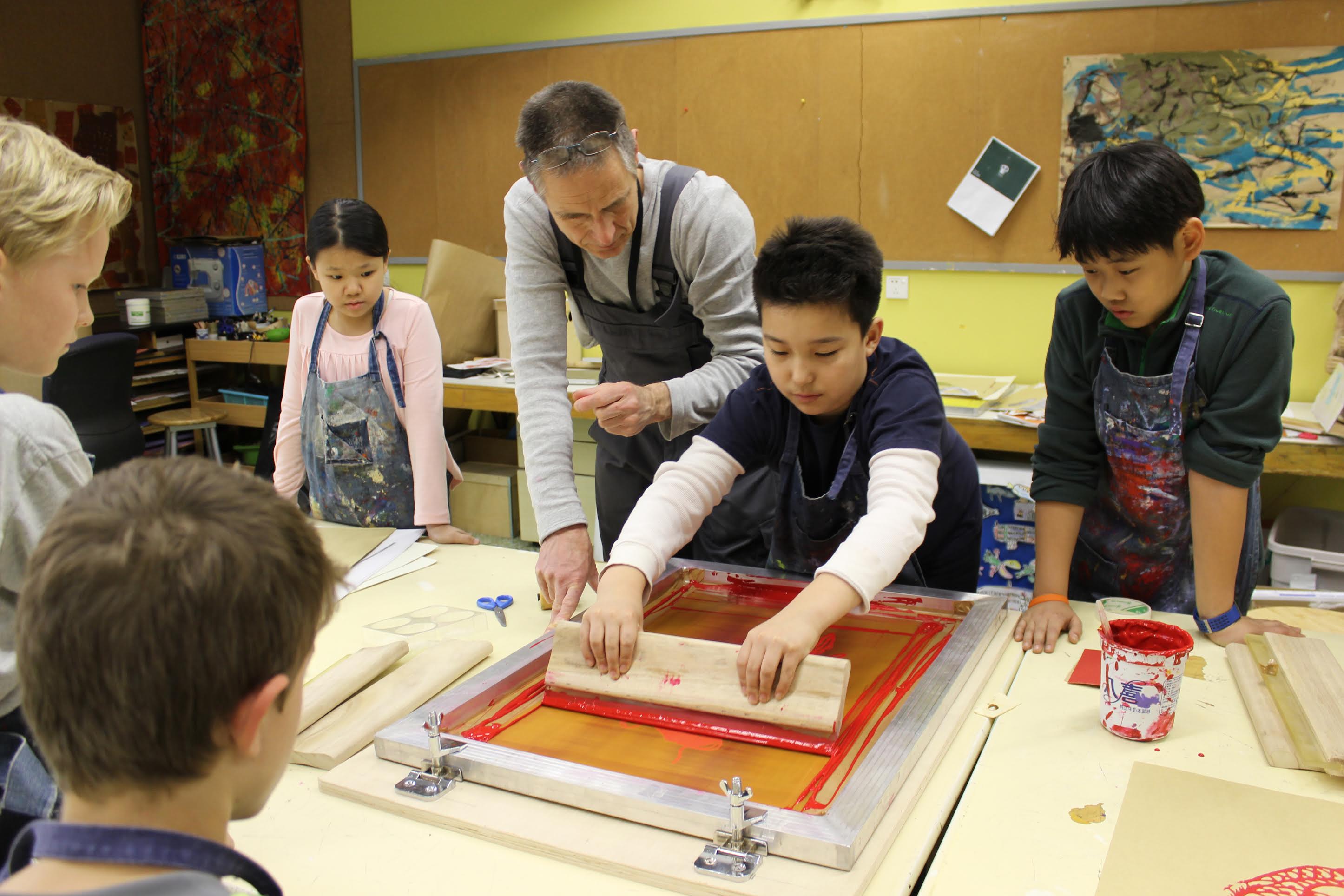 A screen printing class with the 5th grade students

On my way back from WAB to the residency studios, I wouldn't stop at 'Jenny Lou' the supermarket that also sold western food and organic produce. It was the preferred choice of my colleagues from the other Red Gate Studios, but I went instead to the local market and the vegetable shop close to my studio. A small family business that was always packed with people. They didn't know what to make of me, a Westerner in a grey jumpsuit, my normal work outfit. They were looking at me when I was choosing my rice, flour, soy sauce, vegetables. They were all very curious!  When it was my turn at the cash counter the woman in charge weighed my produce. I saw fresh tofu next to her cash register and pointed at it. She laughed at me and cut a piece the size I suggested. She added up the numbers in her head and mentioned the price. I pointed at the cash register, I wanted to see a number. She didn't understand what I meant and said the number again. I tried to explain that I didn't understand her.  There was still a smile on her face, but she was getting impatient. People were waiting. She had to take action and take care of business! Without any hesitation she took my wallet took out some notes, showed them to me and put the change back in. But she was also very curious and as it was my first day there was still a Euro banknote in my wallet. She took it out looked at it, showed it to the other people. They had all had a long working day, they were tired, they wanted to start preparing dinner, but what an interesting situation that was. Who was that guy, what was he doing here? Intense discussions started. Don't know where they decided where I came from, no way I could make it clear to them, let alone that I was teaching screen printing at WAB. But from the first day on I came in every day, tried things I didn't know, got some spring onions for free sometimes. They stopped looking at me, I became a regular, but I still got a smile from the woman in charge. On my last morning I went in to buy some oranges with my last money.  With three oranges I still had a few coins left and I wanted them to give to her. She refused, no way! She wouldn't take it.

With the coins still in my pocket, I collected my materials at WAB and bumped into one of my regulars and new '5th grade masters printers'.

"Did you forget? I told you, I am leaving today". He paused and looked at me… "wish you a happy life then!"

Stefan Hoffman was in residence at WAB & Red Gate in March 2016. All images and videos courtesy of the artist.