PAST RESIDENT PROJECT: Where does nature begin and end?

As part of China Residencies' research, we also interviewed many artists and and residency directors about the projects undertaken while on residency in China. We asked Jay Brown, Lijiang Studio's director, to tell us about one of the most marking projects created by resident artists. He obliged, thrilling us with his account of Katalog's mushroom sculptures, a disastrous hail storm, homemade ice-cream and bucketfuls of toads.

"Two American artists in a collective called Katalog proposed art based on energy cycles around the farm here. Cycles of day and night, growth and decay, like the process of rotting wood that enables mushrooms to grow. The artists used mushrooms as their medium, they made sculptures and installations starting from mushroom spores, installing them as filters in places that might want some bioremediation.

Every week during their residency, they conducted public research into the surroundings from their mobile lab: a natural history museum on a tricycle. They presented their findings in a continuously open studio, in drawing sessions, and microscope sessions. With their enthusiasm, we experimented with making everything ourselves. We even made our own beer. The farmers here were interested to see that Americans who had come from so far away and had access to so much, would be willing to spend so much effort to make something from scratch.One artist, Sarah Lewison, participated in the "Back-to-the-Land" movement very thoroughly, raising her kids with less technology. Her son, duskin drum, was the other half of the Katalog team. Part of their project was to communicate that history in China, and one way of doing that was to adapting works from the 60’s and 70’s, such as Gordon Matta-Clark’s “Fresh Air Cart.” As they translated and performed texts, these gatherings became study groups and performance groups. In the West, we don’t always read the texts associated with art works, but those gatherings people here seemed to take the written word quite seriously. At that time, the head of the Environmental Protection Bureau, Pan Yue, was really radical. He got fired of course, but through his text “Young China, Green China,” for example, people were astounded to read such critical thoughts from a government official.

Communication wasn't such a big barrier for these artists. duskin is a performance artist and a street performer, and he and Sarah were quite familiar with agricultural life.They also studied Chinese every day. They wrote those words on the wall: 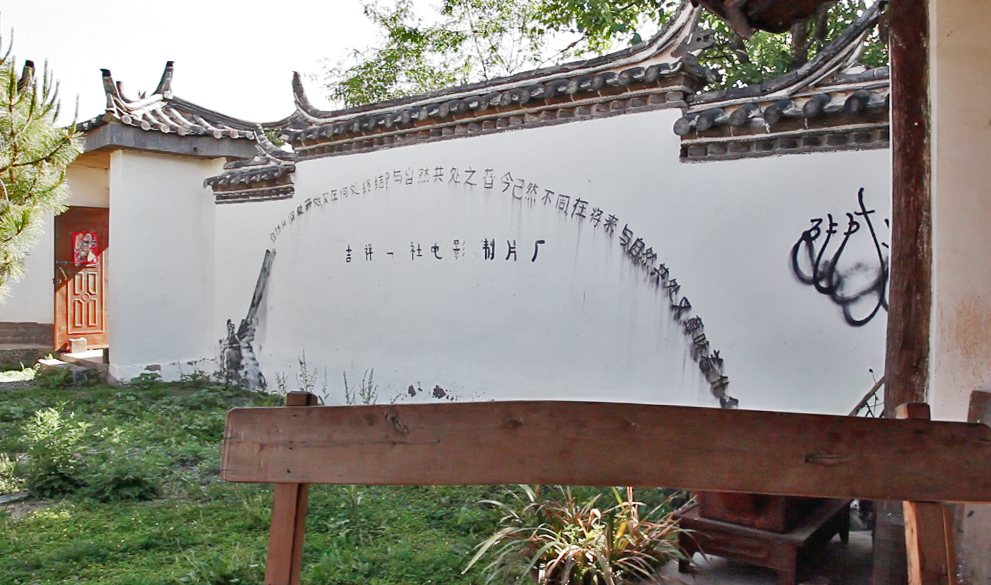 Those words are about another one of their projects. While they were here, the Olympic torch was going to come through Lijiang. People were looking forward to that, but about two or three days before the torch came through, there was a hail storm. Weather was brewing up in the mountains. In the summer here, ordinary weather can suddenly turn into a hail storm, which can be very destructive to the crops, so the local government relies on artificial weather control to prevent this damage. There are four guns around the lake that shoot silver iodide capsules up into the air to seed the clouds and cause precipitation. Some of the farmers are paid to be on call to fire the guns -- every time the weather gets overcast, they could get a call to shoot the ice out of the clouds before it can form big hailstones. But this time, the storm came and they didn't get a call. A huge hailstorm devastated all the crops. The apples and peaches weren’t ripe yet, and after that storm the apple didn't fruit for several years. The corn was ruined too, so both the cash crops and the staples were destroyed. The farmers tried to get answers from the government but the government wouldn't talk to them, so instead they obtained phone records that showed the local government hadn’t made the call to suppress the hail because they didn't want to disturb the itineraries of higher-ranking government officials that were flying into the Lijiang airport for the Olympic Torch event. Instead of slightly rerouting their airplanes to safely shoot the hail out of the clouds, they just let the storm happen. This was outrageous, people here were very upset. All this led to complicated discussion about compensation....

From our perspective, the fact that the farmers were expecting weather control was astonishing. People expected someone to control nature. We had a lot of questions, and we wanted capture people's answers on camera. But most people didn't want to talk about it on camera, especially since the compensation hadn't been settled yet.

So we resorted to reenacting and dramatizing the event. At that time, there were a lot of toads around, local kids were always playing with the toads. We asked them to bring toads, and paid them 1 mao [0.1 RMB or two american pennies] per toad. We ended up with lots of toads, toads everywhere. We made a green room for the toad actors and shot some video of the apocalyptic scene, of toads jumping from the roof. We also made ice cream. You can put cream, sugar and flavor in a plastic baggie and pack it with ice. Then you pack newspaper around it and tape up the bundle and it becomes a soccer ball. If you kick it around for an hour it becomes ice- cream! We just wanted to find a funny way for people to engage with the hailstorm, to talk about these events openly. Somehow even topics like the end of the world, the end of nature, ice cream, hail, and toads -- it all fit together on a day like that."

You can read more about "Living with Nature: precipitation enhancement and hail suppression" on Lijiang Studio's website